From VibraImagePedia
Jump to: navigation, search

Vertical human head position controlled by vestibular system by the means of head-neck anatomy. Two month old child begins to poise the head in vertical position on reflex level, firstly performs visible movements for it. Adult people also performs micromovements for poise vertical head position, because it is impossible to coordinate vertical mechanical balance of heavy object without movements. The trajectory of 3D head movement is enough complicated [2,3] and used for different vestibular reflexes researches and human health diagnostics, because vestibular system links with sensory system, nervous system and every part of human body. Vestibulo-ocular reflex (VOR) is a reflex eye movement that stabilizes images on the retina during head movement by producing an eye movement in the direction opposite to head movement, thus preserving the image on the center of the visual field.

Sensory systems code for four aspects of a stimulus; type (modality), intensity, location, and duration. Certain receptors are sensitive to certain types of stimuli (for example, different mechanoreceptors respond best to different kinds of touch stimuli, like sharp or blunt objects). Receptors send impulses in certain patterns to send information about the intensity of a stimulus (for example, how loud a sound is). The location of the receptor that is stimulated gives the brain information about the location of the stimulus (for example, stimulating a mechanoreceptor in a finger will send information to the brain about that finger). The duration of the stimulus (how long it lasts) is conveyed by firing patterns of receptors. Vestibular system as typical sensory system reacts to stimulus. But gravitation is constantly working stimulus, so vertical head coordination becomes constantly working and reflex process. This is the main physiology difference between vertical head coordination and any other sensory process that works sometimes. 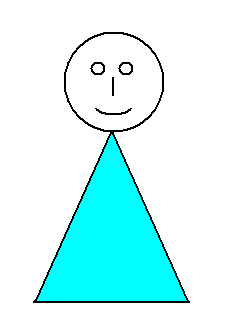 Of course it is simplified expression of VER and head movement. Real trajectory of three dimensional head movement is more complicated and every head point has own trajectory. Real facial-head 3d-form is also more complicated than circle. So real VER determines dependence of spatial-temporal movement energy distribution controlled by vestibular system from the emotional human state. This dependence visualized by vibraimage displays spatial-temporal movement energy distribution for the accumulated time period.

1. Viktor Minkin, Nikolay Nikolaenko. Application of the VibraImage technology and systems for the analysis of motor activity and the study of the functional state of the human body. Med Tekh. 2008 (4). Springer New York, Received: 24 March 2008 Published online: 21 November 2008